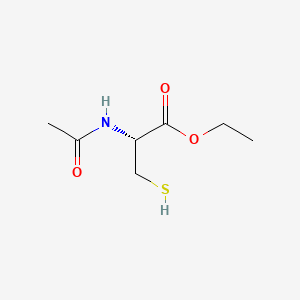 N-acetylcysteine ethyl ester (NACET) with a chemical formula of C7H13NO3S is a white powder at room temperature. N-acetylcysteine (NAC) can undergo esterification of the carboxylic group to produce N-acetylcysteine ethyl ester (NACET) which has 60 % higher bioavailability when compared to the parent molecule of NAC. It can cross the blood-brain barrier (BBB) to be available in brain cells as well. (Shahripour et al., 2014). Having no electric charge at neutral pH and lipophilicity makes it highly soluble to cross the BBB.

NAC is one of the major metabolites of NACET which is produced and accumulated in RBCs. NAC derived from NACET is an antioxidant protecting against oxidative damage and used as an antidote for paracetamol intoxication. The current study using animal models confirmed the use of NAC and NACET as an antidote for paracetamol overdose intoxication, NACET being more effective. Cys-containing drugs like NACET can be a source of Cysteine (Cys) which is required of Glutathione (GSH) synthesis which is an internal system of antioxidants (Acharya and Lau-Cam, 2010).

Another mechanism of action is the enhancement of Hydrogen sulfide (H2S) release. H2S has been used as a potential therapeutic treatment for various diseases. The release of H2S in a controlled manner is important at the physiological level. NACET is much more effective than other analogs to increase the circulation of H2S in several organs when rats were used as a subject (Giustarini et al., 2018a).

In a study that involved an animal model, blood from rats was collected after administering the dose of either 60 mg/Kg or 6 mg/Kg. Blood was screened for Cys and GSH, well-known metabolites of NACET and an important part of the endogenous antioxidant system. It is believed that increased concentration of GSH has shown many health benefits. Results of the current study indicated that NACET is potentially more effective as a GSH precursor as compared to other similar compounds because of its ability to penetrate the cell membrane of RBCs to make sure that enough of CysSH is available to synthesize GSH. Increased content of GSH is helpful to protect from the intoxication of paracetamol and oxidative stress. Compared to other counterparts, NACET may also be better in vivo candidate to be used as an oral donor of H2S (Giustarini et al., 2012). Oxidative stress may cause many disorders including neurodegenerative diseases. NAC is a metabolite of NACET and a good candidate to reduce the oxidative stress and damage it could cause to central nervous system (Sonnen et al., 2008).

In another study when rats were fed with NACET, GSH content was significantly increased in most of the tissues including the brain thus acting as a drug that can cross blood-brain barrier (Dringen and Hamprecht, 1999).

In another study, rats were fed NACET to access its effect on retinal cells. Results showed a strong increase in GSH content in the eyes of rats. Increased levels of GSH can neutralize free radical species which is one of the main causes of various eye-related disorders (Tosi et al., 2021).

In one of the studies when mice were used as an experimental animals to access the protective effects of brain infarction after the use of NAC and its derivatives including NACET. Compounds under study including NACET were administered (only one at a time to subject animals) at the time of ischemia induction, intraperitoneally at the dose of 150 mg/kg. it is believed that acrolein is involved in brain infarction. NACET showed a significant decrease in brain infarction by detoxifying acrolein with glutathione catalyzed by glutathione S-transferases (Uemura et al., 2018).

In a comparative study to check the efficacy as an antioxidant, human umbilical vein endothelial cells (HUVEC) were incubated with different drugs including NACET. The concentration of GSH and Cys significantly increased in cell culture treated with NACET (Giustarini et al., 2018).

In another study, human retinal pigment epithelial (RPE) cells were used to study the antioxidant effects of NACET and compared with similar compounds. After 16 hours of treatment with either NACET or other compounds showed that NACET significantly promoted the natural antioxidant system which in turn could be helpful to avoid many diseases including age-related macular degeneration (Tosi et al., 2021).

A double-blind placebo study was carried out for the effect of NAC, a major metabolite of NACET on 43 patients. Six-month changes were measured after administering 50mg/kg/day dose of NAC. A significant improvement in the fluency of letters and Wechsler memory scaler figure reproduction was seen (Sonnen et al., 2008).

In a double-blind placebo study when the efficacy of NAC (a metabolite of NACET) was determined by using human subjects, no side effects were recorded (Sonnen et al., 2008). No side effects were noted when the mice model was used for an experiment to see the effectiveness of NACET on brain infarction (Uemura et al., 2018).