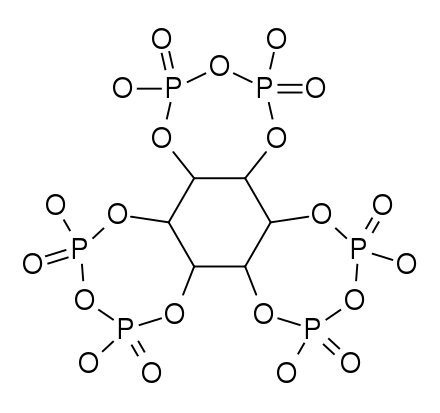 Item type: powder
Quantity per vial: 5g
CAS code: 802590-64-3
Storage: Store in a cool and dry place. Keep away from direct sunlight and heat.
Disclaimer: not for human consumption. Keep out of reach of children.

[yasr_visitor_votes]
Myo-inositol trispyrophosphate (ITPP) is an inositol phosphate, a pyrophosphate, a drug candidate, and a putative performance-enhancing substance, which exerts its biological effects by increasing tissue oxygenation. ITPP is a membrane-permeant allosteric regulator of hemoglobin that mildly reduces its oxygen-binding affinity, which shifts the oxygen-hemoglobin dissociation curve to the right and thereby increases oxygen release from the blood into tissue. Phytic acid, in contrast, is not membrane-permeant due to its charge distribution.

Human clinical trials were registered in 2014 under the compound number OXY111A. The substance has also been examined in the context of other illnesses involving hypoxia, such as cardiovascular disease and dementia (Wikipedia)