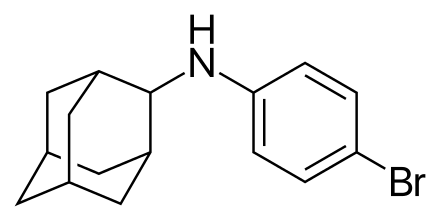 Bromantane is an atypical psychostimulant and anxiolytic drug of the adamantane family related to amantadine and memantine which is used in Russia in the treatment of neurasthenia. Although the effects of the bromantane have been determined to be dependent on the dopaminergic and possibly serotonergic neurotransmitter systems, its exact mechanism of action is unknown, and it is distinct in its properties relative to typical psychostimulants. Because of its unique aspects, bromantane has sometimes been described instead as an adaptogen and actoprotector.

The therapeutic effects of bromantane in asthenia are said to onset within 1- to 3-days. It has been proposed that the combination of psychostimulant and anxiolytic activity may give bromantane special efficacy in the treatment of asthenia.

In a large-scale, multi-center clinical trial of 728 patients diagnosed with asthenia, bromantane was given for 28 days at a daily dose of 50 mg or 100 mg. The impressiveness were 76.0% on the CGI-S and 90.8% on the CGI-I, indicating broadly-applicable, high effectiveness. The therapeutic benefit against asthenia was notably observed to still be present one-month after discontinuation of the drug, indicating long-lasting positive effects of bromantane. Quality of life was significantly increased by bromantane, and this increase remained at one-month after withdrawal of bromantane. 3% of patients experienced side effects; none of the adverse effects were serious; and 0.8% of patients discontinued treatment due to side effects. Bromantane was also noted to normalize the sleep-wake cycle. The authors concluded that “[Bromantane] in daily dose from 50 to 100 mg is a highly effective, well-tolerated and [safe] drug with a wide spectrum of clinical effects. Therefore, this drug could be recommended for treatment of asthenic disorders in neurological practice.”<br/><br/>

Bromantane is described primarily as a mild psychostimulant and anxiolytic. It is also said to possess antiasthenic properties. Bromantane is reported to improve physical and mental performance, and hence could be considered a performance-enhancing drug.

Bromantane has been found to lower the levels of pro-inflammatory cytokines IL-6, IL-17 and IL-4 and to normalize behavior in animal models of depression, and may possess clinical efficacy as an antidepressant. It has also been found to increase sexual receptivity and proceptivity in rats of both sexes, which was attributed to its dopaminergic actions. It has been proposed that bromantane may suppress prolactin levels by virtue of its dopaminergic properties as well.