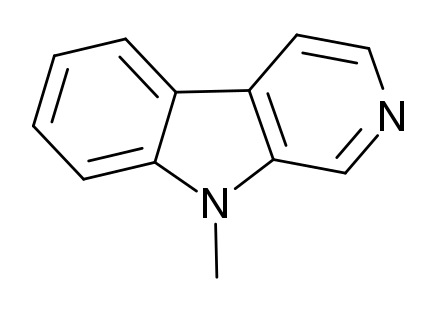 9-methyl-β-Carboline (9-Me-BC) is a derivative of β-Carboline with molecular formula C12H10N2. β-Carbolines (BCs) belong to the family of carbolines, which have been found naturally in different kinds of meats, fruits, alcohol, and coffee. It is also present naturally in the human brain, cerebrospinal fluid, and plasma (Gruss et al, 2012).

β-Carbolines (BCs) are derived from tryptophan and its derivatives. Initially, these compounds were thought to have neurotoxic actions. They were regarded as potential pathogenic factors in Parkinson’s disease since the amount of these compounds present in these patients was significantly higher when compared to the control group. In an earlier study, it has been identified that 9-MBC exert neuroprotective and neuron-differentiating effects. It also slows down the programmed cell death by lowering the activity of caspase-3 while the ATP content increased. (Hamann et al, 2008).

In another animal study it has been demonstrated that, beyond its neuroprotective/neurorestorative and anti-inflammatory effects, 9-Me-BC acted as a cognitive enhancer that improved spatial learning in a hippocampus-dependent task. Moreover, the length of dendrites was significantly increased in the animals treated with 9-Me-BC. Interestingly, 9-methyl-β-carboline reversed the dopamine-lowering effect of the neurotoxin which in turn may show huge benefits that dopamine exhibit (Wenricke et al, 2010). Another study confirmed that 9-Methyl-β-carboline inhibits monoamine oxidase activity and stimulates the expression of neurotransmitters like dopamine and serotonin thus causing a positive impact on the body (Keller et al, 2020).

In another study, it has been demonstrated that beyond its neuroprotective/neurorestorative and anti-inflammatory effects, 9-Me-BC acts as a cognitive enhancer in a hippocampus-dependent task and that the behavioral effects may be associated with a stimulatory impact on hippocampal dopamine levels and dendritic and synaptic proliferation. (Gruss et al, 2012)

In summary, 9-Me-BC seems to be a reasonable candidate which might have huge therapeutic potential but still need research and human trials before drawing any conclusion. In one study it has been shown that it has multimodal properties which may interfere with the multifactorial disease-causing mechanisms making him a strong therapeutic candidate for mitigating neurodegenerative processes. Moreover, 9-Me-BC is the only BC that showed neuro-protective and even neuro-regenerative effects in in vitro (Hamann et al. 2008; Polanski et al. 2010) and in vivo (Wernicke et al. 2010) studies.

The reverse of dopamine lowering effect and possible consequences

This compound reverses the dopamine lowering effect which in turn may have many positive effects on animal behavior which include but not limited to elevated motivation, enhanced memory, and cognition. An adequate supply of dopamine also elevates the mood by enabling feelings of pleasure and satisfaction.

9-methyl derivatives like most β-carboline alkaloids are efficient photosensitizers which means they can absorb light to transfer energy to other molecules.

In a recent study, it has been found that 9-methyl-β-carbolines may cause DNA damage even at neutral pH (Vignoni et al., 2013)

Being as neurotoxic is another side effect, which β-carbolines and some of their metabolites can exert. In another study, it has been found that dopaminergic neurons could be stimulated by 9- methyl-β-carboline (9-Me-BC) (Gruss et al, 2012).

Further in vivo studies needed to show the tolerance of 9-me-BC with possible side effects and reveal whether 9-Me-BC merits further development as an investigational new drug (Keller et al. 2020)

There are studies about the effect of  9-Me-BC on human cell lines (Zawirska-Wojtasiak et al., 2020) but yet no human trials reported in peer-reviewed journals for this compound that can determine its safety.

In a study, it has been proved as an enhancer to spatial learning in rodents when its efficacy was measured as a cognitive enhancer. Furthermore, it also increased the length of dendrites and reversed the dopamine-lowering effect (Wenricke et al, 2010).